Reporters, editors, media owners and university students in Quetzaltenango, Huehuetenango and Guatemala City attended the symposiums, which focused on new techniques for investigative journalism. The symposiums, held Feb. 7-13, were organized by the Public Affairs Section of the U.S. Embassy in Guatemala.

Almost 700 journalists, university students and professors attended the investigative journalism sessions, which were instructed by Walker in Spanish. Among the subjects discussed were developing an investigative news story, interviewing sources and organizing and writing investigative stories.

Iris Pérez, a journalist with LaRed.com who attended Walker’s symposium at Universidad Mariano Gálvez in Guatemala City, said, “After your presentation, my perspective about journalism has changed.”

Walker was also interviewed by television and radio stations across the country about the importance of investigative journalism, freedom of expression and journalist safety. She stressed the need for in-depth reporting as the country strives to strengthen its democracy and engage its citizens in decisions that affect the future of their country. 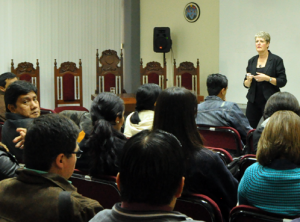 The journalism training symposiums offered by InquireFirst aim to provide journalists in regions throughout the world with specialized training in investigative reporting that covers a wide range of subjects including corruption and organized crime, white collar fraud and the environment.

Walker is an experienced lecturer in Latin America on reporting techniques for journalists. For the past six years, she has offered week-long symposiums in Latin American countries including México, Guatemala, Honduras, Nicaragua, Costa Rica, Bolivia and Argentina.

At InquireFirst, Walker will lead the journalism symposium program which will be focused on offering training to journalists in Latín América, the Middle East and África as well as to university students who represent the next generation of journalists.

MERIDA, Mexico – “There’s no more important work than the work being done by journalists,” said Brian O’Donnell, director of Campaign for Nature, during a February 2020 environmental investigative journalism
Continue

LAUSANNE, Switzerland – We’re pleased to announce that InquireFirst has awarded our first reporting grants to a team of Latin American science writers to support their work on a cross-border
Continue

MEXICO CITY – “Writing is music…language can be used in so many creative ways,” Deborah Blum, director of the Knight Science Journalism Program at MIT, told almost 30 science and
Continue

SAN JOSE, Costa Rica – Science and health journalism should not be limited by international borders. Complex new health threats such as Zika virus that occur in a “noisy” media
Continue

LA PAZ, Bolivia – These were the last days of class for a committed group of journalists who had been studying and reporting and writing all year to earn a
Continue

ASUNCIÓN, Paraguay – It’s been two years since Paraguay’s access to information law went into effect and reporters say they are often turned away when they use the law to
Continue
Donate