InquireFirst board member and health care expert Rosemary Gibson engaged in an in-depth interview on the Ralph Nader Radio Hour about her recently published book, “China Rx: Exposing the Risks of America’s Dependence on China for Medicine.”

“Our listeners should be notified that this is going to alarm them,” Nader said when introducing Gibson’s work to his audience. “Right now, more and more of the medicines in our country

are imported from China and India.

“You argue very convincingly, Rosemary, that there’s a national security problem here,” Nader told Gibson. “And secondly, to put it mildly, the inspection level by the FDA of these labs in Chinais non-existent, confused or very rare.”

Enrique Bustamante, director of Mexico City-based Fundación Ealy Ortiz and InquireFirst media partner, challenged science journalists across the globe to build networks to strengthen reporting on science, health, technology and the environment. Bustamante issued the challenge during a keynote address at the opening ceremony of the 2017 World Conference of Science Journalists in San Francisco, California.

Fake News and the Future of Journalism

Robert Hernandez, InquireFirst board member and journalism professor at the USC Annenberg School for Communication and Journalism, talks about the challenges journalists face in this troubling new environment of fake news.  During his TedXTalk, Hernandez underscores the need for credible, accurate reporting. 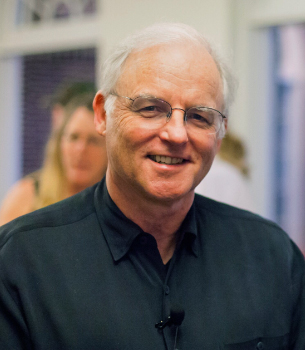 California Humanities, a non-profit that promotes the humanities, asked 40 notable Californians, including InquireFirst advisor Richard Louv, to write about the traditional yet tenuous relationship between the humanities and journalism. Here is his essay.

During my lifetime, the humanities and journalism have been interdependent, each improving and nourishing the other. The future of that relationship is not guaranteed.

I write nonfiction books. For three decades, I worked as a newspaper and magazine reporter and columnist. Most journalists my age, certainly those who earned their degree from Kansas University’s William Allen White School of Journalism, which I attended, were marinated in one particular idea, and it wasn’t objectivity. The idea was fairness. That idea was nurtured in our journalism classes, but even more through a liberal arts education, which gave us a broader understanding of human beings.

Most young journalism students of my era attended schools with strong liberal arts programs. We were steeped in the humanities, the study of how human beings process, document and communicate the human experience: history, literature, language, the arts, philosophy, civil discourse and civil society. Traditional journalism’s fundamental formulas were grounded in the humanities, which required us to step into the shoes of people from other times and cultures, people who did not look or talk like us, people with starkly different points of view. By putting us in those other shoes, the humanities encouraged a sense of fairness, which is the practical application of empathy.

To be fair requires us to acknowledge our bias, and everyone has more than one. To be fair means seeking out multiple and disparate views from people who deserve a dignified hearing. To be fair does not mean reducing every story to two sides. Being fair is not about point/counterpoint, which is what now passes for fair and balanced. More often than not, every issue has three, four, ten sides. To be fair means to reasonably include as many of them as possible. To that mantra, some of us added another qualification: To be fair goes beyond reporting problems; it requires exploring possible solutions, drawn from as many perspectives as possible.

Most journalists tried their best to follow this humanities-based code of conduct. That code was enforced from above and self-policed within the community of journalism. Sometimes harshly. Not one of us was perfectly fair, but we knew that fairness was the standard. In newsrooms, this standard of fairness was protected by understood firewalls that existed between departments of news, opinion and advertising.

From the late 1960s through the 1990s, the journalism code of fairness remained strong -- probably stronger than it had ever been. Then came the growing power of the Internet, shrinking budgets, economic contraction. The walls came tumbling down.

Today, the desire for real journalism has been replaced by the desire for likes and tweets. Few news outlets retain adequate budgets for in-depth or investigative reporting. The ranks of courthouse, statehouse and foreign correspondence are decimated. Into an information swamp flow Internet trolls, purposeful disinformation, and, on TV, panels of paid political surrogates. Most media outlets are neither liberal nor conservative. They’re opportunistic. They produce and reflect a culture of unfairness and intolerance, where lies are welcomed as entertainment.

Foundation-supported journalism is trying to replace what we have lost through demise of newspapers and other producers of long-form journalism, but it remains underfunded. Good online journalism does exist but few notice it. Meanwhile, the newly dominant culture of unfairness and intolerance threatens not only responsible journalism, but the future of our justice system, education, and our political and social democracy.

Ironically, one of the few protections we have from the final dominance of that culture is the survival of the humanities, our endangered source of fairness. If truth has a future in America, we must support the humanities and a renaissance of good journalism, in all its forms.

Richard Louv is the author of nine books, including ‘Last Child in the Woods’ and ‘The Nature Principle’. He is chairman emeritus of the Children & Nature Network, and an advisor to InquireFirst, a not-for-profit news organization. [mashshare]